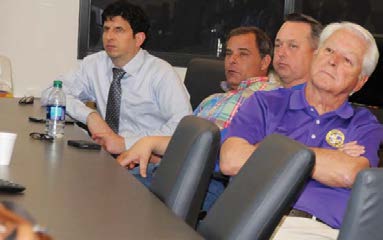 After lots of talk in the past year about starting major dredging projects in the Morgan City area, officials say work will finally be in full swing by the summer.
The Port of Morgan City hosted a stakeholder meeting and its regular monthly commission meeting Monday.
By September, officials hope to achieve a decent enough water depth to accommodate a lot of vessel traffic from Crewboat Cut south of Morgan City in the Atchafalaya River to the end of the Atchafalaya River Bar Channel, which empties into the Gulf of Mexico.  Sediment accumulation has stifled waterway commerce in the Morgan City area, because many vessels cannot get through the waterways.
The river and bar channel are authorized to be 20 feet deep and 400 feet wide, but the river is rarely consistently at those dimensions. Officials expect the river to be dredged to 18 feet in the Morgan City area by September.
Brice Civil Constructors, which has a contract with the U.S. Army Corps of Engineers to use an innovative, special purpose suction dredge to remove fluid mud, known as fluff, from the Atchafalaya River Bar Channel, should arrive on site as early as May 1 and as late as June 1, said Tim Connell, operations manager for the Corps’ New Orleans district.
That contract could be worth up to $21.8 million and continue up to four years. Brice only gets paid if it meets certain production standards during the dredging process. The projected arrival has been delayed about a month due to several different issues.  Brice plans to use a 145-foot long offshore support vessel with a pump and two drag arms off the back to remove the fluff from the channel, said Jon McVay, Brice president. The company is an Alaska native corporation.
Brice has identified the vessel it plans to use and will lease that vessel for at least the first year of its dredging work in the bar channel, McVay said.
Manson Construction, which has a roughly $15 million contract to dredge the river from Crewboat Cut to the northern part of the bar channel, should arrive in late March or early April in the cut and be finished up to the bar channel by the end of July, Connell said. That contract will address buildup of sand in the river by using a cutter-head dredge to re-move it.
Officials expect to award a contract to dredge and take care of sediment accumulation issues in Bayou Chene by March 30 and may commence dredging in April, Connell said. But port officials expressed no objection in delaying that contract if it saves money.
Much of the dredging work that’s getting ready to take place is made possible by the drastic increase in dredging funds secured during 2018 after getting roughly $6 million to dredge the prior few years.
Port leaders learned last year that roughly $50 million to dredge would be coming to the port. For the 2018 and 2019 fiscal years, about $15 million was allocated in the Corps’ budget to dredge the area’s water-ways. On top of that, another $20 million became available in supplemental funds.
Charles Brittingham is senior vice president at government relations firm Cassidy & Associates in Washington, D.C., and has been working with many different people for about two years to try to help secure more dredging funds.
The port committed $1.25 million months ago to the Corps to be used for dredging. Though that amount may not seem like a lot compared to the vast amount of federal dredging funds, Brittingham said having “skin in the game” for a local entity is often a key to consistently getting healthy federal funding.
Durund Elzey, assistant deputy district engineer for the Corps, also spoke at the stakeholder meet-ing. He discussed the Mississippi River & Tributaries and Atchafalaya Basin Program. He referenced the Atchafalaya Basin Floodway System, which has struggled to get funds in recent years.
Water management units within the system are designed to restore historical water regimes and limit the amount of sediment coming into the basin, Elzey said.
The Old River Control Structure maintains a 70/30 spilt of flow, meaning that 70 percent of the flow is sent down the Mississippi River at that structure, while 30 percent of the flow is directed to the Atchafalaya River.
In the aftermath of the 2011 flood, the Corps rec-ommended doing a sedimentation study to effectively manage the flow and sediment traveling through the Baton Rouge area, and officials are currently exploring that problem, Elzey said.
Morgan City Harbor and Terminal District Commission President Joe Cain said the port’s issues with sediment buildup in its waterways are a two-fold problem in that much of the dredged material is pumped right back in the river.
Cain asked Elzey to bring the message back to the Corps’ New Orleans district and promote bene-ficial use of the fertile sand from the Atchafalaya River to create land, especially in the nearby dying Terrebonne Parish marshes.
Elzey said the gover-nor’s advisory council has looked into that issue. The biggest challenge to bene-ficially use dredge materi-al is funding, and someadditional authorization will be required to allow the Corps to actually transport the sediment, Elzey said.
Published by Daily Review 02/12/19
Links to presentations from 02/11/19 Stakeholder Meeting:
Dredging Status Update – Tim Connell, Operations Manager, Corps of Engineers, New Orleans District
Update on Specialty Built Equipment for Bar Channel – Jon Mcvay, President, Brice Civil Constructors
Presentation on Mississippi River & Tributaries (MR&T) and Atchafalaya Basin Program - Durund Elzey, Assistant Deputy District Engineer, Corps of Engineers, New Orleans District