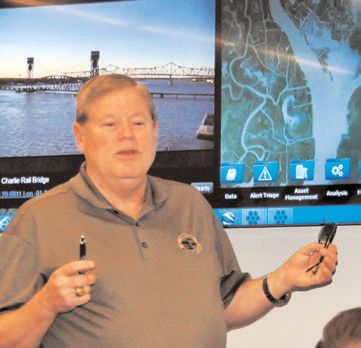 Port of Morgan City Executive Director Raymond “Mac” Wade speaks
during Monday’s port meeting held at the new Government Emergency
and Operations Center.  Behind him are screens showing a view of the
Atchafalaya River in Morgan City and an aerial view of the surrounding waterways.

The Port of Morgan City’s new Government Emergency Operations Center has gotten quite the test during the past month with multiple agencies operating out of the building on a daily basis. Port officials opened the $11 million center in early January, sooner than they expected because of the high water on the Atchafalaya River. The river crested at 8.18 feet Jan. 22 in Morgan City. “We put this thing through an unbelievable test,” Port of Morgan City Executive Director Raymond “Mac” Wade said. The Louisiana National Guard, Corps of Engineers and Levee District have all used the building regularly as an emergency command center. The port commission held its first monthly meeting in the new two-story, Category 5 hurricane resistant center Monday. It is located on La. 182 in Morgan City adjacent to the Morgan City Municipal Auditorium. “It’s been a very, very busy month,” Wade said. Wade thanked officials for all their hard work during that time. Architect Carl Blum said the center, which is 99 percent complete, has a few “punch list” items that should be in place by March. Almost all furniture is in the building as well. About one third of the parking behind the center is done, he said. State officials have approved the plans for the St. Mary Levee District’s office in the building, and the levee district should be able to move in to its permanent home before the end of the summer, Blum said. On Monday, Wade displayed the Touch Assisted Command and Control System that shows live feed at different spots around the port and on the waterways.

The St. Mary Parish Sheriff’s Office, Morgan City Police Department and St. Mary Parish School System expressed interest in getting trained to operate the system, Wade said. The system allows local agencies to communicate with one another to coordinate response efforts more efficiently. “We’ve got a system here that can get everybody unified under one roof,” Wade said. The commission approved upgrading and maintaining the center’s Visual Electronic Transmission System at a cost of $47,000 and maintaining the Touch Assisted Command and Control System at a cost of $27,000 from American Integrated Contractors. Commissioners also approved spending up to $110,000 for American Integrated Contractors to improve the audio system in the center and install equipment in the media room on the first floor. Wade announced that the Corps of Engineers has awarded a contract for a dredge demonstration in the Atchafalaya River Bar Channel. The dredge should be on site by mid to late April to begin the demonstration, he said. Port leaders are trying to keep the Bar Channel dredged to its Congressionally authorized depth 365 days a year to allow vessel traffic to navigate through the channel. The Corps only has the funding to keep the channel dredged a few months out of the year. On Wednesday, port officials plan to take a trip to the Bar Channel to determine how the high water has affected the channel, Wade said. But officials already know the water has brought in more fluff, or fluid mud, to the channel. Also at the meeting, Coast Guard Capt. David McClellan said he anticipates the emergency vessel movement controls currently in place, which require an extra tugboat to “shadow” a towing vessel past the three bridge complex in Morgan City, to be lifted Wednesday once the river dips below 6 feet.