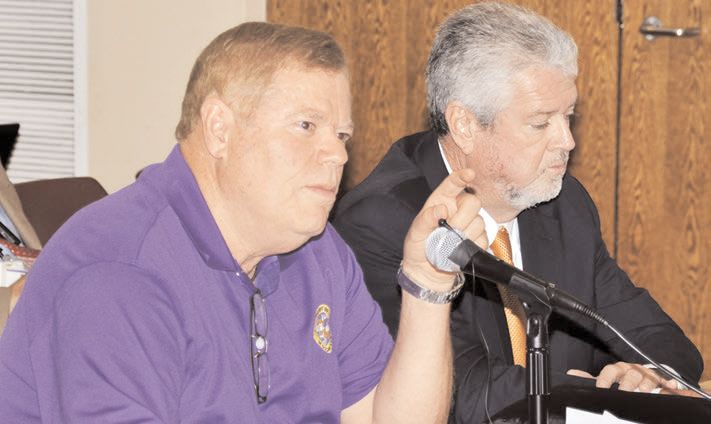 Port of Morgan City Executive Director Raymond “Mac” Wade speaks during the Louisiana Coastal
Protection and Restoration Authority Board meeting held Wednesday at the Morgan City Municipal
Auditorium.  Wade requested that the port’s dredging projects be included in the state’s coastal
master plan citing the potential beneficial use of dredge material to restore the coast.  At right
is Port of Morgan City dredging consultant Ansel Taylor.

Port of Morgan City leaders made their case Wednesday to include the dredging of the Atchafalaya River and surrounding waterways in the state’s coastal restoration master plan, saying that the fertile soil dredged out of the waterways could be used to rebuild coastal communities in dire need of material to create land. The Louisiana Coastal Protection and Restoration Authority Board held its regular monthly meeting Wednesday at the Morgan City Municipal Auditorium as part of its annual road show bringing meetings to different coastal Louisiana communities. Port of Morgan City Executive Director Raymond “Mac” Wade requested that the Port of Morgan City’s Atchafalaya River dredging project be included in the state coastal master plan. There are “two bottlenecks in the Atchafalaya Basin,” one near Morgan City and the other near the Gulf of Mexico, Wade said. Port officials experience the most issues with sediment building up in the Atchafalaya River Bar Channel. The channel is 22 miles long and starts 20 miles south of the Port of Morgan City dock. “We think we have something to offer,” Wade said of the sediment dredged from the Atchafalaya. Dredging the Atchafalaya River Bar Channel will also help keep the channel open and navigable for vessels, he said. Sediment from the Atchafalaya River has built barrier islands that stay in place because of the rich, fertile soil used, Wade said, referring to islands built in the 1980s. Unlike many surrounding areas along the Louisiana coast, the Morgan City area is actually building land through the accretion of sediment, Wade said. The Atchafalaya Delta and Wax Lake Outlet are the only two growing deltas in the U.S., Wade said. The deltas are expanding because there’s no place for sediment in the river to go and it’s accumulating in the basin, he said. Coastal Protection and Restoration Authority Chairman Chip Kline said the time frame to get projects into the 2017 state master plan has closed, but mentioned that the port’s dredging project may be viewed as connected to an existing project in the master plan. Areas in the Atchafalaya region are sources for marsh creation projects set to take place in Terrebonne Parish, and authority leaders “remain very open to considering these areas for projects that will be included in the ‘17 master plan,’” Kline said. Authority board member Bill Hidalgo said the soil dredged out of the channel could be put on hopper barges and brought to any site where the material is needed along the Louisiana coast. Hidalgo also serves as St. Mary Levee District Commission president. Board member Windell Curole said the project Wade proposed would help with coastal restoration, navigation and flood protection because the Basin is losing its capacity to handle floodwaters due to the increasing sediment buildup. The amount of sediment traveling through the waterways is causing lots of pressure on the area’s levees, Wade said. The sediment in the Atchafalaya River could cause flood insurance rates to rise because of the flood potential due to the Atchafalaya Basin not being able to drain properly, Wade said. Officials should look for ways to transfer that soil to the areas where it’s eeded, he said. “We’ve got solutions. We’ve got materials ... The problem is where everybody needs the help, our material’s a long distance away,” Wade said.