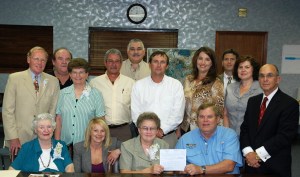 Port of Morgan City - Expands Morgan City Harbor and Terminal District and H&B Young Foundation officials signed paperwork Monday completing the $2.35 million sale of a 23.4-acre tract of land on the Gulf Intracoastal Waterway and an access road. The port currently is negotiating with local maritime company, Intermoor Inc., which is planning to build an estimated $12 millionfacility on the property.