Page 1 of 7
BY ZACHARY FITZGERALD
This email address is being protected from spambots. You need JavaScript enabled to view it. Above, a flag pole gets installed this morning at the Port of Morgan City’s
Government Emergency and Operations Center on La. 182 in Morgan City. 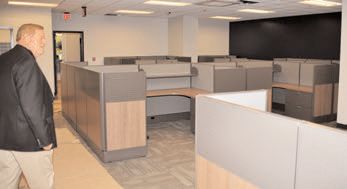 In one year, the Port of Morgan City’s $11 million Emergency Operations Center has gone from the planning stages to nearly finishing construction on a one-of-a kind facility for south Louisiana. The two-story, 35,000-square-foot building is expected to house U.S. Coast Guard operations on a daily basis and will serve as an emergency command center during events, such as hurricanes. Officials broke ground for construction of the center Dec. 2, 2014. The Category 5 hurricane resistant center is located on La. 182 in Morgan City, adjacent to the Morgan City Municipal Auditorium. Work is 99 percent complete on the first floor, while the second floor is 90 to 95 percent done, port officials said. Elevators have been installed in the building. Port of Morgan City Executive Director Raymond “Mac” Wade said in June that once the center opens, there will be no facility in Louisiana that can rival it in terms of is sturdiness. Wade called it a “state-of-the-art” facility. The center is being paid for by $7.1 million in state money and $3.9 million in Port of Morgan City funds. State officials track all money spent on the center extraordinarily closely, architect Carl Blum said. “Anybody who tells you the state is foolishly spending money has never dealt with the state,” Blum said. “They watch every dime (spent).”

The building is “extremely energy efficient,” Blum said. Gaining entry into the building past the front lobby will require card access, Wade said. Cubicles are set up in the area Coast Guard personnel are expected to occupy, and furniture should come in next week, Wade said. Wade expects Coast Guard personnel to occupy about 85 percent of the downstairs portion, he said. All furniture should be in place at the center by Christmas Eve, Wade said. When not being used as an emergency command center, emergency training classes can be held in the center. On Thursday, workers were finishing tile work at the front of the building and working to build a ramp at the back of the facility. The center’s second story has a room dedicated to be the emergency command headquarters with seating space and multiple TV monitors for presentations. The Port of Morgan City and St. Mary Levee District will both have office space on the second floor, Wade said. Officials haven’t set a projected date or when the center may open, Wade said. As part of an agreement with the city of Morgan City to use city property on which to build a portion of the center, port officials agreed to fund the paving of extra parking spaces on the Morgan City Municipal Auditorium grounds. Port officials bid a contract Thursday for extra parking, Wade said. Up to 120 additional spaces at the auditorium may be paved, Blum said.